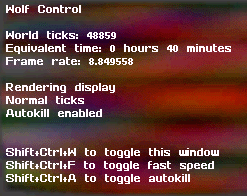 The Wolf Control in action

The Wolf Control is a hidden agent present in Creatures 3 and Docking Station intended for use in wolfling runs, that allows you to:

To activate the Wolf Control, press SHIFT+CTRL+W (i.e. all three keys at once). This does not work on the Mac OS X release of Creatures Exodus. Doing the same again will close the window.

Amaikokonut released the Wolf Control Fix to prevent a problem where on fast computers, Wolf Control could attempt to divide by 0.

Lisdude released a Wolf Corpse Control addon for the Wolf Control which adds another key command to automatically remove creature corpses from the world.