Difference between revisions of "The Lost Cave"

The Albian Temple has always been a mystical place, somehow special beyond others, especially to Norns and Ettins. Perhaps it is no wonder that in the eruption following the Lone Shee's departure from Albia, the Temple was saved. Encased in molten lava, the Temple and its surrounds remained untouched as it was flung into space in the explosion. The lava quickly quickly cooled, forming a protective bubble around the Temple. As the Temple traveled through space, the inhabitants began to evolve, forming entirely new species, distinct from those of Albia. Evidence that some other strange race visited the Temple exist in the form of the symbiotic Caveweed and Cavefish, which are totally unlike anything from Albia. Currently, the Lost Cave (as it has come to be called), is in orbit around a sun in some distant part of the universe.

On one of his regular excursions through the Warp, the Lone Shee came across the Lost Cave... and marveled at the ability of life to exist in almost any circumstance.

The room originally began as a project by artist Bifrost, back in 2004. Liam volunteered to code it, as Bifrost was struggling, and coded several objects before Bifrost and I moved onto other things in our lives and in the community. Several attempts were made to restart the project, but it wasn't until Liam started working on Creatures 2 to Docking Station with Moe that he began to seriously think about finishing it. 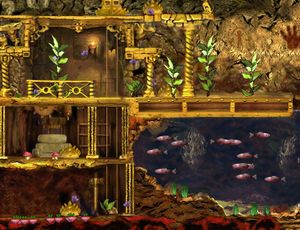 With Moe's help, he pulled together what was existing. The two of them added several new things to give the room a little more life.

The Lost Cave and several of the objects were created by Bifrost. Moe worked to create new images for the remaining objects needed, and shared the code-load. Moe made the fantastic c1-style music and added further sound effects and enhancements. Testers Pirate-Rob and TreeSprite ensured everything worked OK and pointed out remaining bugs.