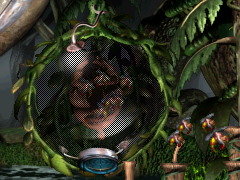 The Stinger is a stinging insect native to the Docking Station Norn Meso. They are normally contained in a pod, but the Hand can let them out, and the big queens can even create nests! Queen stingers are larger than the normal variety.

The Stinger Pod contains the nest of these wasp-like insects. As long as the pod is not touched, the stingers are contained safely within the pod. But once the pod is disturbed, the stingers escape the pod and will infest the Norn Meso with new nests. Queens build nests on any type of soil, but do not feel comfortable nesting too close to another Queen's nest. The trapper plant eats stingers. The more stingers you have, the more trappers you will get. Stingers can also be eliminated by slapping them with the Hand. You can also destroy their nests by left clicking on them. Right clicking on the nest will release more stingers, but won't damage the nest.

Stingers will remember a creature (or hand!) that annoyed them for some period of time and try to sting them, and even let nearby stingers know - though some are more forgetful than others. Stingers associated with a nest will remember their nest and try not to stray too far from it.

Eating them can be confusing to creatures, as they give the same stimulus as being stung. They are also poisonous and will give creatures geddonase and heavy metals. Eating one stinger will annoy nearby ones.