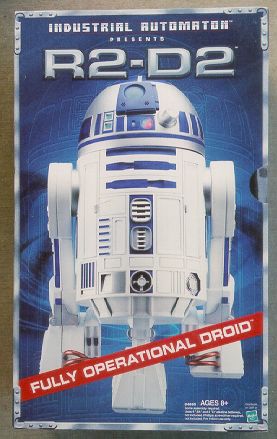 The Interactive R2-D2 is one of Creature Labs's odder productions. Released in September 2002 by Hasbro, this 15 1/2" droid is almost half the original size of the droid in the Star Wars movies. The droid is not a cheap knockoff - it uses sonar to detect obstacles and has proper tracked movement; it also responds to set voice commands to move around and patrol areas, and while it does not share the AI of games in the Creatures series, it can play a number of games (e.g. "laser tag", "room guard", "spin the droid"). It was designed (on the CL side) by Dr Dave Keating and Charles Garcia Tobin.

The toy recieved pretty good reviews and was popular with buyers, but the line has now been discontinued. As of 2005 they appear to be only available on eBay (~$60-$100 depending on condition).