openc2e is an in-development 'clone' of the Creatures Evolution Engine. The primary developer is Fuzzie, with Bdonlan having coded various bits. ElasticMuffin is responsible for the website.

The intention is to have an engine capable of running all the games in the Creatures series, allowing people to run them on unsupported operating systems (such as the Mac) and to extend the engine in ways impossible without access to the source code. Note, however, that openc2e is not a game by itself; it needs game content from elsewhere (either official Creatures games or community-created ones) to be playable. 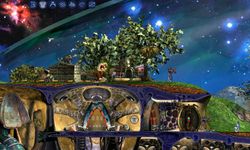 Screenshot of a semi-working SkeletalCreature agent

openc2e is an implementation of the Creatures Evolution Engine (Creature Labs employees often abbreviated this to 'c2e', hence the name), built using C++, SDL and the STL.

It currently consists of a CAOS parser and runtime - supporting multiple versions of CAOS, to allow support for all of the Creatures series - an implementation of many of the CAOS functions, code for simple agents, compound agents and vehicles, and some preliminary creature code.

It runs on Mac OS X and Linux, and Windows support will no doubt be added in the future.

openc2e is currently only useful to developers, because it does not yet correctly run many Creatures agents , nor does it correctly simulate creatures themselves.

Other missing elements at present include the majority of the physics support, network abilities and music support beyond a preliminary implementation (thanks to work done by GreenReaper while developing MNGPlayer).

The current aim is to run the Creatures 3 world successfully, with the eventual aim of being able to 'emulate' any of the Creatures engines, and hence run all games in the Creatures series. It may eventually be the basis for Freetures.

The project also includes some useful tools, such as a PRAY dumping utility similar to REVELATION and the start of a genetic editor.