Note: As there are no genetics in Creatures: Raised in Space; any norn born in the game will use a mixture of the norn breeds listed below.

The game takes place upon the Shee Ark, where the player must save the Norns by opening up the doors to the different Terrariums (the same ones as in Creatures 3). Around the world are small, blue stars that must be placed in a machine by the Norns in order to generate a key. However, the stars have a limited lifespan; stars that rotate faster are nearing the end of their lifespan. When exactly 25 Stars are placed in the machine, it will generate a key. In order to be able to carry stars, Norns must be trained from an early age.

Unlike previous Creatures games, each Norn must collect ten hearts in order to become fertile. These hearts are found throughout the Shee Ark, and can be collected by both Scrubby and the Norns. Ettins and Grendels are always infertile.

Around the world are a variety of medicinal plants that resemble Herbs from Creatures. These herbs have special effects on Norns, such as promoting sleep, getting rid of illness and decreasing Tiredness. Eating certain herbs too frequently can cause addiction. There are also several varieties of weeds found in the Jungle Terrarium that can be detrimental to a Norn's health.

Norns in Creatures: Raised in Space are programmed to die from illness at a certain age. The average lifespan of a Norn in this game is around four hours. 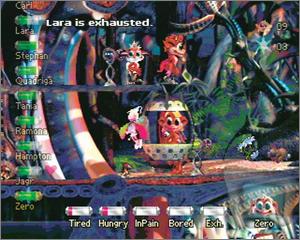 Jungle Terrarium - The fourth and final Terrarium, the Jungle Terrarium introduces the Grendels, who are rather fond of attacking Norns. The Terrarium itself has a variety of poisonous plants, that appear to be life-threatening to Norns, and incurable. There is no Piranha pool, and the top half of the Terraium is mostly empty.