Difference between revisions of "Aquatilis Caverna" 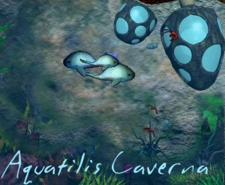 In September 2007, Moe, with permission from Liam, released a patch for the plant overpopulation and image issues.