Both versions have long lives. They cannot breathe above water, and will drown fairly quickly if placed above water. Their immune systems are weaker than a regular grendel's. They like to eat critter meat, but need to eat less than a regular grendel. The final change is the fact they will not usually use doors or elevators, due to the lack of the drives. 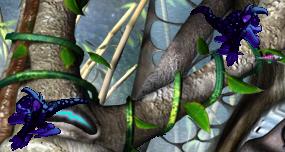 The Dunkleosteus are the agressive variant of the Ancient Fish Grendels. Their name is derived from a predatory fish from the Devonian. They are a dark, greenish color. Their lifespan is the same as the AC Edition, but they reach youth faster than the AC Edition does and after that, they take longer to reach adulthood. Opposed to the previous two versions, which are both social, Dunkleosteus are loners. They don't breed as fast as the AC Edition, but they are more likely to breed then the Original version. They get angry much easier than the previous two versions, and will slap nearby creatures without much hesitation. They themselves are immune to being slapped to death. They are entirely carnivorous-any food that is not a critter, bug, or something along those lines is unhealthy for them. If they get homesick, they will start attacking other grendels. Finally, they have a stronger immune system than the previous two versions.

The original version is able to be downloaded from Creatures @ CU7, although they were once able to be obtained at the Gameware Forums before the crash. The AC Edition and the Dunkleosteus are both currently unavailable.