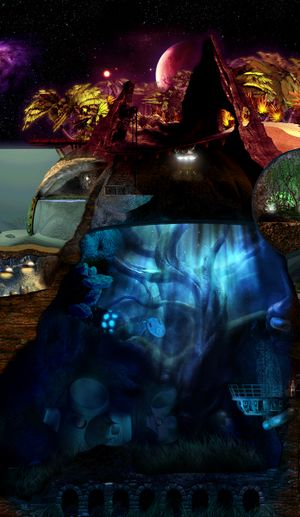 Ainarda (Elvish Quenya "Holy Realm"; 'aina'=holy 'arda'=realm) is a new world for Creatures 2 created by Merboy. A name change has also been under consideration and may be retitled as "Albia Nightland".

Ainarda is a peaceful environment for all Norns, Ettins, and Grendels. There are no illnesses, food is plentiful, all weeds are removed, and new areas have been created for the new world. Seen in the preview, the volcano for example, once a radioactive and unsightly mess, has been replaced with a new ocean, much larger than either of the original seas. This ocean contains an underwater tree, new species of fish, and new areas for bottom-dwelling MerNorns and other water-oriented life.

The main goal of Ainarda is to perfect the Creatures 2 Albia, removing all less-than-beautiful rooms and backgrounds and substituting them for more appealing ones. The hazy skies have been replaced with vast stretches of stars, galaxies, brilliantly colorful planets, and supernovas. As well, players of Creatures 3 and Docking Station will enjoy some of the more pleasant areas from the respective games that are included in Ainarda such as the Norn Terrarium which has been settled into the underground portions where the putrid swamps used to be. Additionally, Ainarda enjoys its own ambient music.

Though production of the new world has since gone into hiatus, the project is available to any who wish to take it up. Spriters, cobblers, and coding experts should contact Merboy either through Creatures Wiki or his Albia2000 Profile under the same handle.