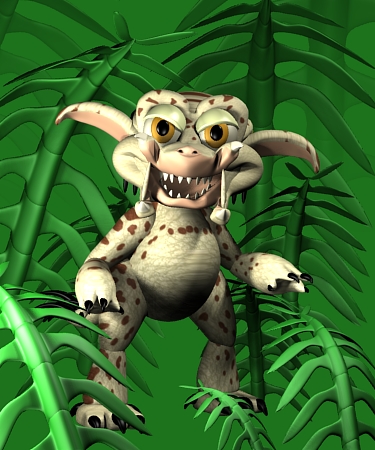 The Yautja Norn breed was made by Ghosthande for the CCSF 2010. They are based on the Predator aliens from the Predator science fiction series.

Yautja Norns have a CFE based genome and are very aggressive. They share some similarities with Sabertooth Norns in that they have a strong immune system and are picky eaters and avid hunters to a degree similar to Beowulf Norns and Hardman Norns. They will hunt down and kill any Grendel they see, so it is best to keep any non-aggressive grendels away from them. They have peculiar mating behaviours, where female Yautjas will frequently Hit their mate.

The Yautja Norns are bundled with several agents: the Jungle Grass; which installs tall grass in either the Norn Terrarium or Grendel Jungle, Crunchy Beetles; an edible Critter, and the Death Update, which causes a skull to be left behind in some circumstances when a Grendel dies.

The Yautja story can be read here.

The Lone Shee discovered the Yautja Norns after an alien ship crashed into the Capillata. The alien abruptly left in their own ship, leaving behind several tools and a puddle of goop. After scanning, the yellow-green goop seems to be blood. The Lone Shee spliced the DNA from the spilt blood into a Norn egg, and the Yautja Norn breed was created.