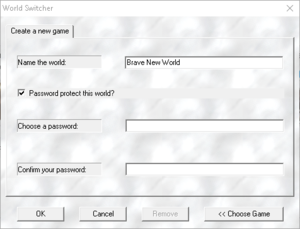 Making a new world with the world switcher.

On loading, the World Switcher presents a list of named worlds that can be clicked on to play. When creating a new world, a password can be specified. Note that some versions, on some computers, including the Steam and GOG versions, have a bug where the World Switcher mistakenly thinks that worlds created without passwords require one, making it impossible to load the world. This can be worked around by giving all worlds a very short password such as 'a'.