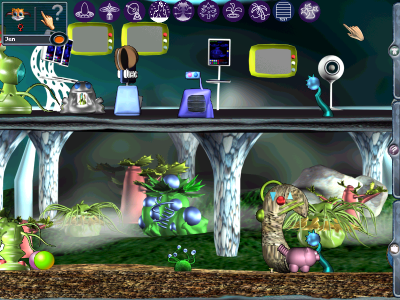 The Tropics was a metaroom made by MNB, Mandy, and Helen. It was originally available at Creatures Mainframe but was taken down by MNB in lieu of a version 2.0 release. The timing of this event was unfortunate as it happened just as MNB decided to leave the Community due to "certain recent events". Therefore MNB made an announcement declaring he would not upload the new release of the metaroom, and later added that he would legally pursue anyone who attempted to distribute The Tropics 1.0 since he wished the older file to remain unavailable. However, it is available at the Creatures Keepsakes section of TreeSprite's Creatures Grove forum, and also available at Eemfoo.org.

Like every other day the Shee had an idea pop in his head,
"Normally I would start my day off by setting up a new warp portal, and exploring a new dimension for new life forms; but I am getting rather bored of that." The Shee thought to himself.
"Aaha!" He shouted when his great idea popped in his head.
"Instead of exploring a new place, I will create a new place! And plus I am running out of space for my norns too." From that, the Shee started work on some new equipment, to help him create his new environment!
The Shee quickly pulled out his copied notes that he had saved from when he made Capillata. There he read over his notes on what to do. In only a matter of hours he had plans all done up, tools made, and all the extra chemicals and equipment he needed. The Shee, all ready to go grabbed his hidden test tube of genetic muck (The same stuff he made Capillata out of), and a nice cup of tea. The Shee place the genetic muck into a tube a bit larger then he was, filled with a liquid mixture that would promote growth, and sent a little bit of electricity through the tube to get the genetic muck to start its' growth.

Days passed and the little blob of genetic muck slowly started to take shape. The blob had only been in the tube for 6 days when It needed to be removed and placed into a new tube, but it was nowhere near done growing. The Shee was very excited when the day came to move the small ship like thing out side of his ship, and attach it to it. The Shee got on his space suit and out the air hatch dragging behind him the pod, it was only minutes till the pod attached it's self to the ship and continued to grow. Back in Capillata, the Shee started work on a new teleporter that would take him from the ship to his new environment attached to the hall.

It's now day 15 and looking out the windows around Capillata, you can clearly see the pod has shaped very well, and it's time to view inside! The Shee was ready with a teleporter in one hand, ready to place on the floor of the new environment, and a one way teleporter he crafted for these kinds of occasions in the other. The Shee locked in the estimated coordinates for the environment and hit the big red button on his gadget marked 'GO!'. In a flash The Shee was standing in the new environment, it was very empty as he peered at his surroundings, he looked at the floor, and placed down the teleporter and secured it to the floor, he then looked a bit closer and saw that there was a whole in the floor, and down beneath him was another floor, but that floor has the pods soil lining the floor,
"great for growing plants." thought the Shee. He then decided to set up a new work station on the upper floor and use the lower floor as the living environment for his norns. Days passed and the Shee worked hard to make tools for the room, he made a lift so he could make it to the down stairs floor with out effort, and he made a biscuit vendor for those long days of working.

Finally on Day 30, his tools were complete and the Shee had completed an array of different organisms for the lower floor. Most of which effect the surrounding environment. The Shee then decided it was time to introduce the first norn into the room! The norn seemed quite bored but loved the fruit that grew off a tree that the Shee made, and loved the Shee's biscuits even more. The only problem was the little norn got bored very quickly so off to work the Shee went! After a few days of work the Shee had came up with the most amazing toys! The little norn loved them, the norn had everything he needed and then the Shee turned on the teleporter and went back to the main ship to continue on with his warp studies, and let a free flow of norns into the new environment the Shee proudly called 'The Tropics.'

The Tropics was designed to be set up by the player with toxic or non-toxic options. The bacteria filter/generator can be toggled to either remove or create bacteria. The green toxic vendor can be activated to create toxic plants and foods or placed in the player's inventory to keep it out of harm's way.