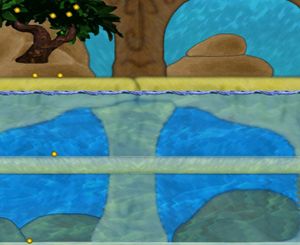 Screenshot of the Mermaid Caves

The Mermaid Caves v. 0.9 is an old beta of what later became the Aquatilis Caverna project, released as a special surprise for the CCSF 2006. It consists of three levels - two that are aquatic and one terrestrial - and a lemon tree, which is the only included source of food. Both aquatic levels have salt water. It overlaps with the Seaweed Tavern and lacks CAs; each level also consists of only a single room, which can impede creature navigation.