The Den is a metaroom created by both Sentinal and Helen that is currently in development to house the Raccoon Norns. It was first unveiled during the CCSF 2004. The Den consists of three metarooms that are all linked together and has an underground theme. Other contributors include AquaShee, Toby Johansson, Liam, and Emmental. 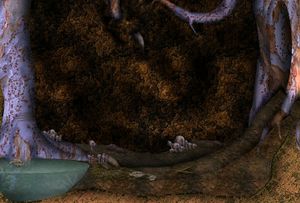 The metaroom was meant to include the Raccoon Norns, who live in The Den, and assorted agents:

A beta version of the Den's first two rooms is available on Eem Foo's Archive, including concept art and agent art, though the rooms are empty.