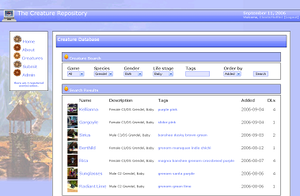 Give me your Ettins, your Norns,
Your huddled Grendels yearning to breathe free,
The babbling egg-spawn of your teaming shores.
Send these, the worldless, lacking cheese, to me:
I lift a carrot beside the golden door!

The Creature Repository (or TCR) was a site designed to serve as a large-scale creature adoption center, originally begun in late 2004 and eventually launched for the CCSF 2006. Registered users could submit their creatures to the database for download along with a photo and the creature's information. The site used tags to describe the characteristics (such as colors and breed) of each creature and to make it easier to find creatures with a certain trait. You could also browse random creatures from the database, or creatures submitted by certain users.

The site had a few handy tools for registered users, including one for exporting photos from a C3/DS Creature in JPG, PNG, or GIF format, a PRAY decompiler, and others.

As of 2018, it had over 2400 Creatures available for download. All submitted creatures can still be downloaded from the site, which now serves as an archive.