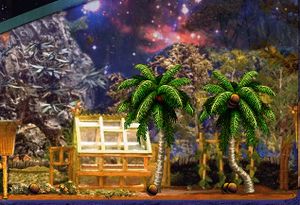 Terra Reborn is a third-party metaroom for DS standalone. Made by the Terra team, it follows the same theme - a mixture of C1 and C2 graphics - but is slightly larger.

There is also a small underwater section with edible fish, and one room that can be closed with a locking door.

The room comes with a chemical grapher than can graph one chemical from the selected creature, an automatic food vendor that can be turned on or off, and an unnamed tool that will remove the Terra Reborn plants touching it when activated. There are also potions that, when drunk, supply life, reduce tiredness and sleepiness, and give a little protein.

Terra Reborn can be downloaded from AmberCreatures or Creatures Caves, among other sites.

The room lacks CA links between the levels, which can impede creature navigation, and it does not have a signpost. It also does not have interaction scripts for the plants, and the elevators and buttons give incorrect stims. The pears and goldfish may also cause errors due to their filenames clashing with those of other agents.

In May 2022, Allekha updated Moe's edition of Terra Reborn and posted it for download on Creatures Caves.