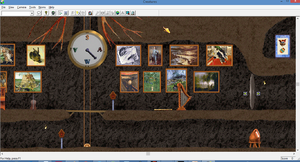 The main hall in Terra Nornia.

Albia was getting overcrowded. The Hand was keeping up to 24 norns and hordes of grendels in a world meant at most for 12 norns and one grendel. Food had never been that abundant and it was running short. In the overcrowding and starvation it was even rumored that some creatures were living on Breaded Hatchling Norn!

Then word came that a new world was opening up. Two of the Handish had created a world where the inequities and lack of foresight of the Shee deserters had been corrected. A world with abundant rooms and the privacy of locking doors. A world filled with food, drink, toys and the amenities of life. A world where all consenting adult creatures could do as they liked with each other. A world with a larger vocabulary. A world with, dared they believe it, seasons!

A competing rumor said that the Shee were returning to re-capture their abandoned pets. The Shee were offering a new world but every creature who went with the Shee would have to undergo treatment that not all would survive intact. Faced with the choice of an easy and reversible transition to a new world now, or the chance of permanent personality annihilation at the hands of the dreadful Shee later, the exodus to Terra Nornia began.

Terra Nornia is a new world for Creatures designed by Sandra Linkletter and Lis Morris. It is entirely different to Albia, and we hope you and your norns enjoy using it!