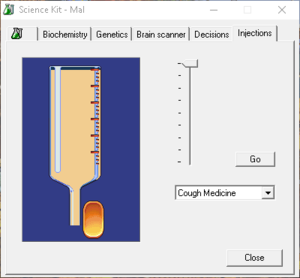 The injection screen on the C1 Science Kit with a full syringe of IV Cough Medicine.

The Science Kit is an applet in Creatures 1 and Creatures 2.

In Creatures 1, there was no Advanced Science Kit. The Science Kit can be used to monitor levels of all chemicals in your norn's bloodstream. The only options to inject are several chemical mixtures (the IV Chemicals, which are nonetheless more than enough to keep a Norn alive after they decide to eat the Deathcap Mushroom or do something equally daft.

In Creatures 2, it is basically a 'dumbed-down' version of the Advanced Science Kit. It can monitor chemicals and inject a few basic chemical compounds such as defibrillant and liquid food, but it can't do much beyond that. However, it does enough to keep a Norn alive if they contract any major disease or poison, including radiation, suffocation and OHSS. The Advanced Science Kit, while more precise, can also be harder to operate due to the need to find the correct chemical (or two) out of 255 possible options rather than the right mixture out of four!

Creatures 2 also requires players to find a power-up before they can use the Science Kit. The power-up can be found just to the left of the incubator room, requiring a lift down, a short trek along the room below, and another lift back up. It is strongly recommended that this be the first trip any C2 player makes with his or her first Norn.

A Science Kit was also planned for Creatures Online.