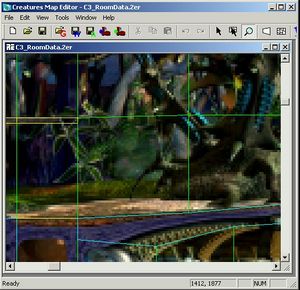 Rooms in the Jungle Terrarium, as shown in Map Editor.

Rooms and doors are the building blocks of metarooms and worlds. A room is a quadrilateral space usually taking the form of a rectangle with straight sides, although in C2 they may have floors of varying height and in C3/DS the top and bottom may be raised or lowered independently of one another.

Despite the name, areas that correspond to one visually contiguous space in the games after C1 - such as the incubator area in C2, the lower levels of the C3 Jungle Terrarium or the lower Norn Meso in DS - are normally composed of multiple rooms linked together. This allows for more natural flow of CAs and provides much more detail and variability in shape than is possible for a single large room, which can have only four sides. Regions in which neither is a factor, such as the C3 Crypt, are usually composed of a single room.

If rooms in C1/C2 are improperly defined, it can result in Black Holes forming.

A common CAOS error in Creatures 3 and Docking Station is "invalid map position"; this is caused when an agent falls outside of room boundaries when they have their attributes set to notice room boundaries. Another common errors are "Failed to get room ID" and "Failed to get room property" which happens if an agent is picked up and held outside the room system. In C3/DS, the wasteland glitch, caused by geats looking at each other, can cause room types to change to atmosphere. DS appears to have a limit on how many rooms (around 2000) it can perform operations on, and after exceeding this limit, attempting to inject metarooms will fail due to errors; this limit is only likely to be reached in worlds where extremely large metarooms with many individual rooms, such as C12DS or C2toDS, have been installed.

C2 only has four room types:

Each room can also have sources for heat, pressure, light, and radiation, which affect the flow of cellular automata through the world.

Unlike in C2, cellular automata generation is not tied to rooms, but to agents.

Returns the id of the room containing the midpoint of the specified agent.

The fungi spore checking that it's not in water before it fruits: