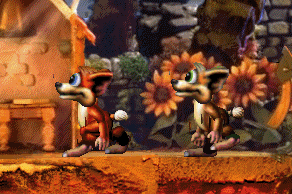 The Ron Norn is a Norn breed that came with Life Kit #1 for C1 and takes up Norn breed slot 6. They are also included in Creatures 2, and have been converted for use in C12DS, including a patch for their arms and legs.

Ron Norns had not been seen in Albia since Earth Year 1995. Ron was the original Norn, and amazingly the genetic code has survived and mutated since the original Ron. As with the Forest Norns, the male, Foxy, and female, Vixy, are different:

As with the Forest Norns, the new and changed genes of Foxy and Vixy are not sex-specific, so their children of either sex can inherit their traits.

Foxy and Vixy are available to download at Eemfoo.org.