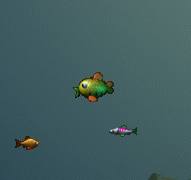 The Puffer Fish is a COB for Creatures 2. It came with the C2 Object Pack 1, and is included in The Albian Years.

The puffer fish swims around the oceans. If a creature happens to fall into the sea, the puffer fish will swim over to him/her, carry him/her to the surface while supplying oxygen along the way, and toss him/her out. It cannot distinguish between normal creatures and aquatic creatures, however.

The original Puffer Fish was converted to Creatures 3/Docking Station as part of Artemia Sea. However, it did not inherit the original COB's behavior. It swims around Artemia Sea, inflating if it sees any creatures nearby. While inflated, it makes for a decent plaything for bored aquatic creatures (and in fact creatures see it as a toy rather than as a critter).