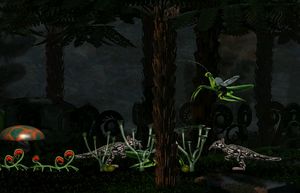 Primordia is a Docking Station metaroom by Ghosthande with a primordial theme, designed for Banshee Grendels. All agents, aside from the door, are inspired by fossils. It contains a Banshee temple. The first version of the room was released for the CCSF 2008, and a second version was released a few months later with fixes and a new critter.

It can be downloaded from Breeders Beware.

For the CCSF 2012, Ghosthande released a new version of the metaroom called Primordia Redux, with improved graphics and code, and additional critters and secrets. Primordia Redux occupies the same physical space as the original Primordia.