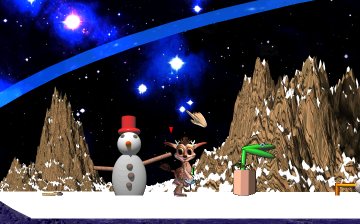 Ostrova (originally known as Ice Ventura) is a paid Christmas-themed metaroom developed by Chaos Created. It includes a few new critters, plants, and toys, and contains both surface and underground areas. It also comes with a Grendel breed, the Yeren Grendels (no relation to the Creature Labs prototype, Yeren). As of 2018, Ostrova is no longer available to purchase, and attempting to access its Chaos Created store page will result in an error. It and the Yeren Grendels can be downloaded for free (Windows, Mac/Linux) from Eem Foo's Archive.

"Ostrova is an icy terrarium dumped in space years ago by the Shee, when things went wrong with the temperature valves. Shortly before things went haywire, some Norns snuck on board with some toys (they wanted to build a snowman) and the Shee, in rather a hurry, forgot to clean up before letting Ostrova drift into space. 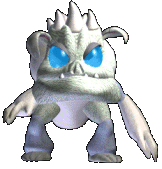 The world is full of fun toys and gadgets, and some new wildlife to enjoy! There's a weird snowman, a scary toboggan ride, a penguin, some butterflies, an odd egg (wonder if it hatches), a soup machine, a snowball launcher, pond life and more - all waiting to be discovered!"

Agents in Ostrova include: