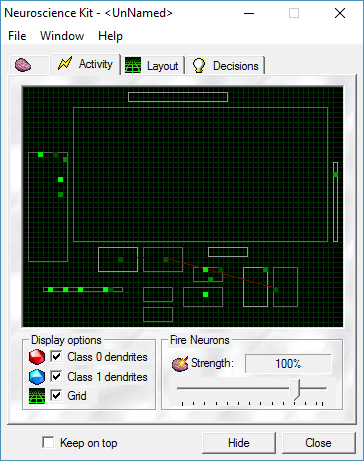 Nova Subterra is an alternative genome for Creatures 2 Norns created in response to criticism of the original genome for its OHSS and other unwanted traits. It was made by LummoxJR with help from Chris Double, who designed the modified brain structure, and tested by several members of the Creatures Community.

The original Creatures 2 genomes treated the creature’s attention as an input rather than a choice to be made; the creature would look at the most stimulating or talked-about type of object at any given time, so the only decision to be made was what to do with the object. The Nova Subterra brain structure replaces the object selection pathway with a full-fledged decision system similar to that of the decision lobe. Instead of receiving inputs from the stimulus source lobe directly, the attention lobe now grows dendrites into the concept lobe. Those dendrites are affected by reward and punishment, so the creature learns what objects are good to interact with in various situations.

An extra input lobe, the drive echo lobe, was also added. It lets creatures make decisions on the basis of drives that they recently had but don’t have anymore.

Nova Subterra is the first genome for Creatures 2 that not only addresses the problems in the original genome, but expands on it. The Norns of Nova Subterra have four new brain lobes, but only two new chemicals are needed to regulate their bodies. The genome includes a number of changes and advancements, including:

Breeders have noted that Nova Subterra norns can be more difficult to breed than norns from the original genome or Canny Norns. Lummox JR hypothesises that this is due to a combination of the travelling behaviour making them unused to the company of other creatures and the Nova Subterra's increased intelligence distracting them. LummoxJR recommends encouraging norns to talk to each other, keeping them in a world with a higher population density, and setting up barriers so that norns do not travel so far.

JayD made another version of the Nova Subterra (the 10 hour Nova Subterra - lives around 11-13 hours) with some tweaks to when they hit puberty and the length of time they spend as adults, with a minor adjustment to sex drive. They are available via an archive of his website, and donate their genetic material to the Sperm Pack COB.