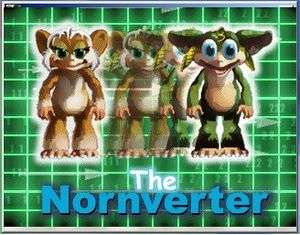 The Nornverter is an application which is bundled with Creatures 2 - it allows norns from the original Creatures to be converted into Creatures 2 format. The Nornverter will also "heal" any Norns it converts, making Tortured Norns such as Slave perfectly healthy. Essentially this is possible because the creatures are not technically converted as such, rather the sprites, name and a few other characteristics of the original creatures are "overlaid" on a standard Creatures 2 genome base. Pregnant creatures will also no longer be pregnant once converted. Also, it is worth noting that people have reported these transferred norns as being more intelligent than the standard Creatures 2 norns.

Grendels, ettins and shee will appear as norns, because there was no genetic code to determine species sprite in Creatures (as there is in Creatures 2) and this was determined by the creature's genus. Since norn is the first entry available for this new attribute, this is assigned to all converted creatures.

For some odd reason, the Nornverter wasn't included with Creatures - The Albian Years. It can be downloaded, however, on this page, at Don's website AmberCreatures.