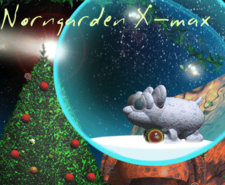 "The Norngarden is a biosphere module that can be connected with the Docking Station and the Shee ship. Its not totally clear if its origin was Shee or not. It is not known if all these plants are artificially created or collected." -- from the Norngarden homepage.

It can be injected on its own or with the original Norngarden 1, though the readme warns that the Norngarden should not be added or removed while Norngarden Xmas is in the game.

The room is small, with a warm main area that has plenty of food sources. The snowglobe level is very cold, especially if it is turned on. The behavior of the objects in the room is a bit inconsistent, which may be confusing to creatures.