The Limited Edition version of the first two Creatures games came with a small plush beanbag Norn, known as a Norndoll. These beanie Norns were likely commissioned due to pressure from the Norn Doll Wanters A Lotters action group on alt.games.creatures. The plush toys are no longer available to buy officially, but they can often be found preowned on websites such as eBay. Please keep in mind that due to their rarity, many of these plushies can fetch quite a hefty price tag!

In addition to the three norns, a prototype Grendeldoll was also developed, but didn't make it to the shelves and remained in the Creature Labs offices for many years. It is pictured here, first from the right. Creature Labs also had a purple medium sized and green large sized plush Norn, (shown right), but these don't appear to have ever been for sale.

No norndolls were planned for release with Creatures Online or Creatures Family, though the former did have a set of two different norn figurines that were released under the "Creatures 4" name, that could be won in various online competitions. Due to the cancellation of said games, these figurines are no longer being manufactured.

You can download the sewing pattern for Alien's, Data's and Don's Norndolls on their webpages. Each of them have a tutorial including pictures on making their individual dolls (Alien's tutorial is in German). Data's pattern is down, but the instructions were archived. 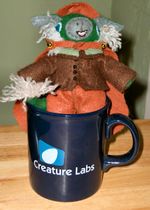