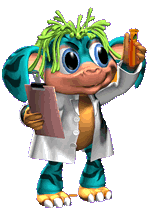 A creature's biochemistry is the collection (sum total) of its chemical reactions. A realistic biochemistry with analagous chemicals, emitters, neuroemitter, and receptors to the real world is a big part of making creatures act realistically, because when their brains are linked up to monitor chemicals they can decide things like "maybe it would be a good idea to eat some food when my glycogen level is low".

In Creatures 2 and Creatures 3, some of the genes involved in biochemistry depend on the organ that contains those genes being alive: so heavy metal poisoning or other diseases can cause a creature to lose some important biochemical reactions.

As of Creatures 2, if you hex edit a gene file, and change the decay rate to values that are not in the included table, you will just get the same behaviour as the nearest lower value in the table. For example, any value from 0 to 7 will behave as 0 does, and any value from 64-71 will behave the same as 64. source

The rate at which reactions occur is concentration-dependent.[1]

They, like in real creatures, work together to ensure the creatures survival. Certain organs, like the heart, lungs, brain, and various support organs, are essential for life in the default genome. If any of these organs stop functioning it can cause death!

Organs all have certain chemical reactions that occur within them, for example, 1 water + 1 nothing = 1 hotness decrease + 1 nothing. This is the reaction for sweating and takes place in the skin organ. If the skin organ were to stop functioning the temperature of the creature would rise.

Organs have life forces and clock rates. The clock rate is how fast the reactions are taking place in that organ while the lifeforce is the health of the organ. Organ lifeforce naturally decays over time as the creature ages, but certain chemicals (Antigens, Lactate, heavy metals) can cause the lifeforce of certain organs to deteriorate faster. Another major lifeforce killer is ATP deficiency, causing all organs to deteriorate very quickly. As of C2, each organ comes with a certain ATP cost, and if an organ does not have enough ATP it loses lifeforce until its needs are met.source

Organs naturally become less functional over the lifespan of the creature - this is controlled by a setting called 'organ vulnerability'.source

Starting in the Creatures Evolution Engine, creatures can have defined neuroemitters. Like an emitter, it gives a small amount of four chemicals. The neuroemitter is triggered by neurons, rather than locus levels. The sole neuroemitter in the standard C3 norn gives adrenalin, fear and crowded when the norn sees a grendel.