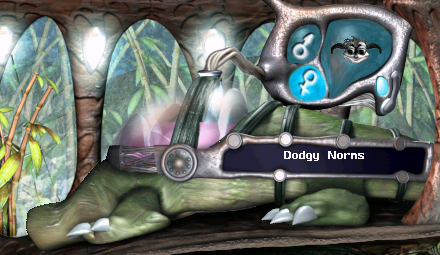 Muco is the egg layer included in Docking Station, resembling a large, grey coloured lizard like creature. A true marvel of Shee biomechanical engineering, Muco is, like Capillata, part animal and part machine. Due to the limitations of the classification system, Muco is considered to be a "machine." Choose the gender of the Norn you wish to hatch, and then create the egg. Docking Station comes with one Norn breed, the ChiChi Norns. Once you add other C3/DS Norn Breeds, you can choose both the gender and breed. Muco will often display a purple question mark instead of a baby creature face for third-party breeds, as the act of laying the first egg of that breed installs the sprites and body data.