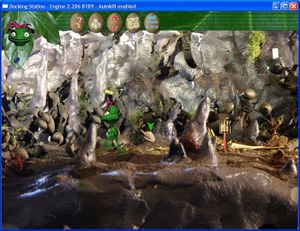 Melloweh is a game created by Chaos Development. Although not a part of the Creatures series (though originally conceived as an addon), it is based around the Creatures Evolution Engine used in Creatures 3 and Docking Station.

The game features two insect races; the gentle Gix, and the belligerent Rokken, who have forced the Gix out of their home and into the garden. The player's job is to nurse the Gix to full strength, and then guide them back to their rightful home.

A prototype of the game was awarded the runner-up place in the HP Award for Interactive Media. A full version is in development.