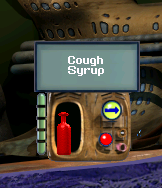 The Medicine Maker is a "dispenser" agent included in Creatures 3, located in the bridge area near the Medical Bay and the umbilical if DS is connected. It requires bioenergy to function and vends several different potions. JayD has released a modified version of this agent, as has Vampess.

1 mole of Medicine One

0.4 moles each of Arousal Potential and Opposite Sex Pheromone

Sometimes, when you don't have time to encourage a creature to eat potion, a CAOS code may be used instead with the CAOS command line. All commands below apply to the currently selected creature: for other variations, please see the codes which affect creatures on the C3/DS CAOS Codes page. Please note that other medicinal chemicals from the C3 Chemical List (either added or subtracted) may be more beneficial than injecting these codes.