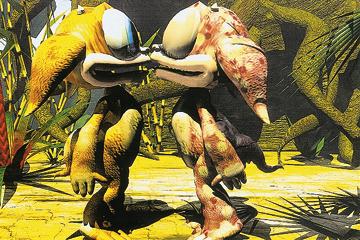 A special time in the lifecycle of the Norn; their mating, or kiss-pop

NB: In the first meaning of the word, the act is produced by one norn pushing another under the right conditions - there is no phrase "Eem kiss-pop norn".

From the Creatures: Official Strategies & Secrets, by Toby Simpson:

"Norn mating is a delicate affair, not at all like our hot and sweaty efforts, and probably not nearly as fun either. But Norns enjoy the moment, which consists of them rubbing noses together. When they are mating, you will hear a long kissing sound followed by a pop." (page 40)

The Dark Creatures Page has a "New Norn Mating Sound" patch which alters the noise made when two creatures mate (and may not be appropriate for younger players!).