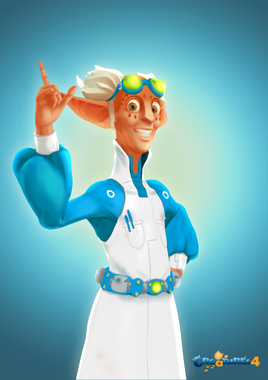 Master Shee would have been a Shee character in the creatures game, Creatures Online, acting as a help assistant in-game and providing the player with any information they may need. Fishing Cactus described Master Shee as "a pretty funny fellow and embodies the “naïve geniality” trait that defines the Shee."

Master Shee has bright orange skin and amber eyes with various markings around them. His hair is white and bushy, reminiscent of that of the scientist Albert Einstein or Emmett "Doc" Brown from Back to the Future. He has also been compared with the character Jak from the Jak and Daxter series of videogames. On his head sits a pair of bright green goggles with blue rims. His known clothing consists of a bright blue shirt with puffy sleeves and a white apron. He also has a blue utility belt with a green clasp like his goggles.

Master Shee's design received mixed reviews. One of the things people criticised was the decision to include a Shee character in the game, bringing them to the foreground for the first time. Another thing criticised was the colour scheme, which was deemed as being too bright and cartoony. Other people thought that Master Shee looked "too human".

Others pointed to the ears as showing a similarity to norns, so that Shee may have created norns in their own image, and that Master Shee's colour scheme and design made him fit in with that of Creatures Online.

"Master Shee" was also used as a nom-de-plume by one of the administrators of the Creatures Online Official Website. This administrator primarily looked after the technical side of things.

Following the cancellation of Creatures Online in 2015, a character called simply "the Shee" who used the Master Shee sprites was a guide to players in Creatures Alchemist.