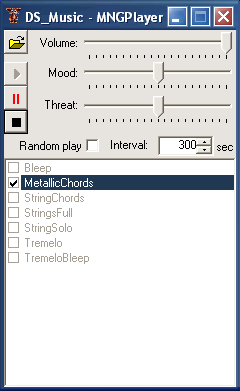 Playing the DS music in MNGPlayer

MNGPlayer is a program written by GreenReaper that was the first tool to be able to play MNG music for Creatures 2, Creatures 3 and Docking Station (or files created and edited by its sister program, MNGPad), allowing the Creatures Community to create and test their own music for the first time ever. However, it was later found to implement AleotoricLayers differently from the actual engines, leading to a sometimes noticeable difference between music played by MNGPlayer and by the games.

It requires the .NET Framework from Windows Update to be installed first. MNGPlayer has been reported to have errors when used on Windows 7 and more recent OSes.

Source code from MNGPlayer is freely available for download under the GPL.