Docking Station was the first Creatures title ported to Linux, thanks to the work of Francis Irving and Ben Campbell.

Docking Station can also be run on Linux using wine.

It is possible to run Creatures 3 on Linux, either by copying from an existing install and making some configuration changes, or by using a special installer script from the CreaturesLinux Yahoo Group, instructions This allows you to create and use docked worlds under Linux without having to buy Linux Creatures Internet Edition. 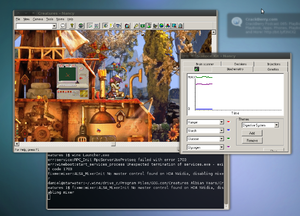 It is possible to run Creatures 1 using WINE. When using the default WINE DLLs, the applets don't function however, and there are graphical issues. The applets can be brought to function by installing Microsoft's native DCOM and OLE implementations (license required). You first have to obtain and install DCOM98. In addition to DCOM98, the file msvcrt40.dll also has to be copied from a Windows installation or obtained from another source (olepro32.dll might also be necessary). Creatures 1 can then be started by running 'WINEDLLOVERRIDES="ole32=n;rpcrt4=n;oleaut32=n;msvcrt40=n;olepro32=n" wine Launcher.exe'. It might be necessary to configure wine to mimic Windows 98 for this to work (use winecfg to change the Windows version to Windows 98). This procedure has been tested with the GOG.com version of Creatures - The Albian Years. Two glitches remain with this solution:

If the View window is displayed incorrectly, disable Allow the window manager to decorate the windows under winecfg. This need to be done if using the Unity desktop environment.

The only option for running Creatures 2 without Windows seems to be the highly experimental openc2e.

The official port of the Docking Station version of the Creatures Evolution Engine, for x86 only. Pretty much the only usable option for Creatures on Linux right now.

The Windows and Linux versions are compatible, so you can use agents, breeds and metarooms developed for the Windows versions with the Linux versions of the games. You can also freely swap exported creatures.

openc2e is an in-development engine which runs Creatures 1, 2, 3, Creatures Village and Docking Station, but is still in alpha stages.

LiveGMS is an online genetics editor.It offers a simple interface, and the ability to add a watermark to your work as well as save it to your computer, and open genomes from your computer. Compatible with C3/DS genomes only.

Norn Builder is a new cross-platform Creatures developer tool being written by Don. The Norn Builder's main functions include the loading, editing and saving of body data attachment files, converting sprite images between breed slots and games, and for use as a creature-poser for making website clip art.

PyGenes is a third party genetics editor for Linux, in development by FishFace. It uses Python, PyGTK and Glade and should be Open Source on completion.

Vim is a free text editing program for Linux. The CDN offers a CAOS highlighting addon that also allows Vim to inject CAOS into the game.