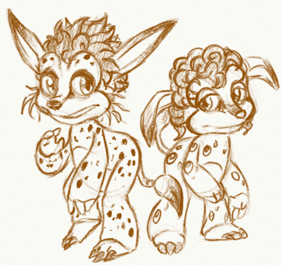 The Leopard Norns were an additional breed for Creatures 3 and Docking Station being created by DarkBurraki. They were not completed or released.

A description of the breed is as follows:

Leopard norns are a bit different then other norns in several ways- first off, they're predatory. They'll still eat fruits and seeds- but they'd much rather bite into a plump, juicy critter. It's not just critters that they harass either, as they'll often hunt down ettins not too unlike the way a grendel would a norn. Leopard norns find attacking ettins to be a fun and rewarding experience. If you raise ettins, it's recommended you keep any leopard norns you may have away from them! It is possible to train your leopard norns to leave ettins alone- but it's not easy overcoming their instincts. Not to mention that Leopards are headstrong creatures- if you reprimand them they'll become angry at you (after a little down time they'll forgive you, so don't worry). On their plus side, they have a decent immune system- and complete immunity to heavy metals! They don't mind heat much either, so this means you can keep them in the desert if you'd like. Breeding wise they're not quite as fertile as other norns, so if you leave them unattended for a while you don't need to worry about coming back to an ocean of hatchlings.

Oh, and one last thing... if they smell grendels around, they tend to retreat. Not because they're scared of them, but because they see grendels as competition for prey.

DarkBurraki has not been seen in the community for some time. It is safe to assume that for now the breed is not being worked on.