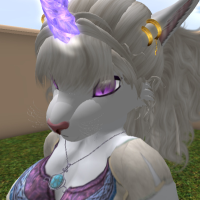 Kilynn SL 2011 I reserve all rights to this image.

jelisa_j, who is also known as Kilynn Singh and Amethyst Gears in Second Life has been drawing since an early age and has a vivid imagination. She loves animals, both real and imaginary. Her interest in 3D started out in 1998 with her acquisition of a 3D program called Bryce 3D. That same year she bought her first Creatures game, Creatures 3. Soon afterward she acquired Creatures 2. She soon got bored of the games and went on to develop her 3D skills. In early 2003 though she found out about Docking Station, by way of another 3D artist's fan page by name of Bloodsong, and started an obsession with the Creature games that she has been unable to shake since.

jelisa_j was working with Poopster and Panther385 on the Hamster Cage Project, a meta-room and breed. Also in the works are several other breeds including the Tilynn Norns, the Dervil Grendels, the Meta Ettins, and the Zinx Ettins/Zinx Norns. The Tilynn sprites and genetics are done.

As a graphic artist her skills have been mainly used in making backgrounds for metarooms, agent sprites, and breed sprites for the Creature games Creatures 3 and Docking Station.

Besides being a graphic artist, jelisa_j dabbles in creature genetics, room mapping, and is an avid creature breeder.

She shares a 3D art site with her oldest sister who is known as jelisa, Dar, and Darlisa in the 3D community. She also loves to write, SciFi and Fantasy mainly, and has always wanted to illustrate her own books.

Currently she is trying to advance her 3D career and is engaged to 'Bunjie' who lives in a time zone 7 hrs difference from hers.