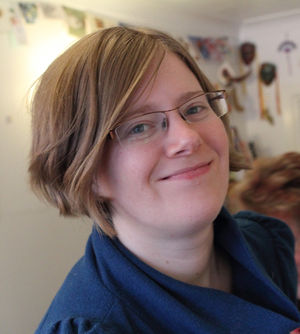 Helen (Helen Emerson) is probably one of the most prolific COBblers in the Creatures Community, creating over 50 C2 COBs, and almost as many for C1. All of these remain available at her website, Helen's Bibble Directory (previously the Norn Adoption Clinic).

Helen actively ran her Creatures website from 1997 until 2002 and was a part of the Creatures community for most of that time. She was a moderator for JRChat and posted to Alt.games.creatures. She briefly ran a Creatures forum with A-Norn, Tim and Uttar which shut down due to web hosting problems. She hosted wafuru's Adventures in Nornsitting! site for a number of years.

Helen was one of the co-programmers for Norngarden 1 and The Tropics. She also created the genome used in Wafuru's Lilac Bengal Norns.

She currently holds the record for meeting the most Creatures community people in the real world having met Dylan (and been best man at his wedding), Vadim, Pez, GreenReaper, Mizgiwir, Scorp, Nornagon, Tim, Travis, Francis Irving, Alanna, HuffaMoose and Syrra.

In 2005 she met up with GreenReaper and Mizgiwir in Cambridge and went on a pilgrimage to where it all started at the Creatures Labs offices. Unfortunately since it was night time and the weekend no one was actually there but they left a little note from the Creatures Community.

Creatures was a particularly important influence in her life because through it she discovered how much she loved programming. It also influenced her to come travelling to the UK, where she now lives and works as a web developer.

Right now Helen is using updating her page on the wiki as an excuse for not writing the presentation she has to give next week.

There is also a Helen Burchmore