It is also home to a variety of poisonous plants and fierce animals, some of which were created by accident by the Shee. Since it is a swampy marsh, it contains high amounts of bacteria, making life in the terrarium a challenge even for the tough Hardman Norn.

The Jungle Terrarium, showing the piranha pond at right and central area at left

Some of the critters inhabiting the jungle terrarium are the kobold, wasp, piranha and rocklice. It's also home to a population of dragonflies, but the developers of the game neglected to put a plant in the pirahna pond for them to climb out on! It's advised you put one of the many available potted plant agents in the pond, the Extra Water Plants cos file by TwilightCat, or transport them to the Norn Terrarium. However, if you do this, the native pests don't stand a chance- which may or may not be a good thing, depending on your tastes. Plant life includes fungi and Tendril Plants. Some aspects of the flora and fauna of the Jungle Terrarium may be restored by using the seed bank under the Spikey Plant. 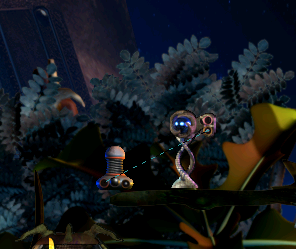 An Anti-Bacterial Spray attached to a lift call button: this will activate the spray after the button is pushed.