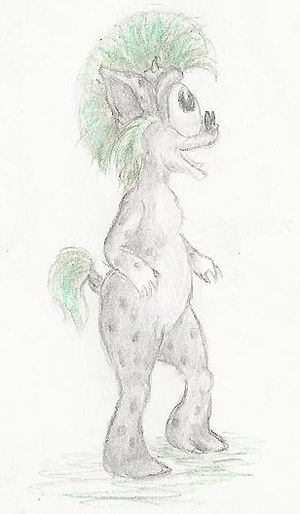 GreenReaper is a green Kai Norn who has been active in the Creatures Community since 2000. GreenReaper created the popular JRNet chat client for JRChat and has made a Docking Station WindowBlinds skin and logon screen skins. GR is also the creator of MNGPad and MNGPlayer (see Music - his favourite is the C2 waterfall theme), made the Sprite Thumbnail Viewer and maintained JRChat and Sine Waves IRC stats. GreenReaper has a wiki user page, and has been a major contributor to and promoter of the Creatures Wiki, later using the experience he gained to found WikiFur.

GreenReaper once maintained a nation on NationStates called the (Benevolent) Dictatorship of Creatures Wiki, for which the description read as follows:

The Dictatorship of Creatures Wiki is a massive, socially progressive nation, remarkable for its burgeoning norn population and complete lack of social welfare. Its hard-nosed, hard-working, cynical population of 1.341 billion are ruled by a mostly-benevolent dictator, who grants the populace the freedom to live their own lives but watches carefully for anyone to slip up.

The children of Creatures Wiki are often remarked upon for their cheery attitude to extreme violence, the tenet of free speech is held dear, the government has cut its subsidies for all special interest groups, major internet servers have acquired citizenship and are voting in national elections, all alcohol is banned, and euthanasia is legal. Crime -- especially youth-related -- is a problem. Creatures Wiki's national animal is the norn, which frolics freely in the nation's many lush forests, and its currency is the cob.

In 2014, GreenReaper was banned from CC Chat, and his status as a wiki administrator was brought into question, due to his views on transgender people and the pronouns he wished to use for them. Several wiki users voiced their concerns on the wiki forum, and his adminship was also a matter of discussion on Creatures Caves that lead to proposed guidelines for biographies on the wiki. He was ultimately not made an admin on the new location of the wiki, and his privileges were removed on the old one.