The odd Gnarler was a shee experiment attempting to create a life form capable of living entirely off of inorganic matter - a very successful one! The Gnarler lives entirely off of rocks from the volcano, using its long tongue to hurl the rocks great distances to crack them into smaller parts. Consequently, the Shee thought the gnarler best at home in the volcanic Desert Terrarium.

At the beginning of the game, several gnarlers are created in the main section of the Desert Terrarium. Sadly, the volcano does not erupt often enough to support them, and they usually die out from starvation or predation of their eggs by the Uglee. They can, however, be brought back with the CAOS command ject "gnarler.cos" 7. On the other hand, you could hook up a pulse switch to the volcano, but the amount of rocks and gnarlers produced is hard for even a high-quality computer to handle without lagging. A possible alternative is to hook it up to a sensor set to detect Ettins; this may be enough to maintain the gnarler population, as they frequently pass through the desert. Another possible solution would be to use a pulse switch combined with a count gate (A combo that works well is to rig up a machine with a pulse switch connected to a count gate set to 19, which in turn is connected to another count gate set to 4, and this connected to the volcano). 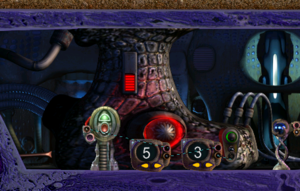 Two delay gates attached to a pulse switch and the volcano controls, useful for gnarler feeding.