The Glettins is a Creatures 2 breed and is made by Norngirl and Grendelgirl (as known as IzumiSabi now). (A breed that was started by Grendelgirl,when she was very young.She made a front head and a single side head, then asked if Norngirl wanted to make it into a proper breed.Based on the side & front head,Norngirl made all the rotations & expressions of the heads,along with the rest of the bodyparts and genom idea, with the approval of Grendelgirl,of course.

The Glettins are a hybrid of Ettin and Norn, but is actually a Norn breed,despite the easy mistake of believing they are a type of Ettin breed,lacking tails along with being short and theyre head resemble a bit Ettins. They are known to be sad looking little things and is quite nervouse as well easy scared and stressed out beings.To ease theyre stress and fears,few tickle from the hand will help soothing them, but food and sleep may help reduce it as well. They tend to listen to the hands command easier,proven you have teached them theyre vocabulary. 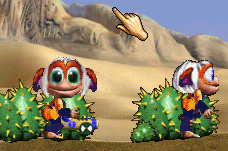 Apperancewise, They are short,have orange fur with darkblue arm and leg markings. They also have darkblue stripes on the back of theyre bodies. Being a mix of both Norn and Ettin,They inherited theyre looks from both: big cute Norn like eyes and Norn ears with darkblue tips from The Norns. And finaly,the white hair,the nose and being tailess is from the Ettin side. Both gender look the same,only that females have green eyes,males have blue.

This breed took Ettin Slot F. A remade version of them might be in the works!