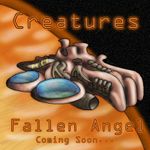 A banner for the upcoming Webcomic

Creatures: Fallen Angel is a series of fanfics being written by Listeel, originally 'airing' on Albia 2000's forums. The stories are set many thousands of years after Creatures 3 and the Lone Shee's adventures, after the Shee Ark has been critically damaged by a stray meteorite. It lands on Sphericus, the planet it is orbiting, and is nearly destroyed - the bare shell and some of the biospheres survive.

Following the crash, the ship begins to regrow, guided by ancient 'auto instincts' designed to protect the ship from danger. These gradually become more complex, creating the governing personality 'The Fallen Angel'. The ship eventually grows to massive proportions and restarts the biospheres, accelerating the Norn, Ettin and Grendel populations' psyches to a near Shee level.

At the time Creatures:Fallen Angel is set, the three societies are at a roughly modern day technology level, though most items are made of the same living material the Ark and Fallen Angel are made of.

Listeel started drawing a webcomic on 4th March 07, posting it on the Albia 2000 forums.