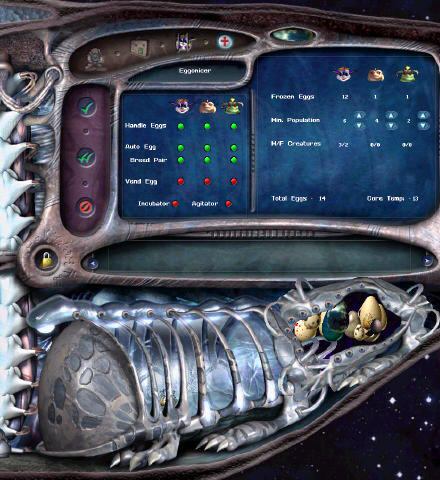 Balor's Eggonicer is an egg handler and creature population monitor.

The eggonicer can handle Norn, Ettin and Grendel Eggs. It works by teleporting any eggs it finds to the Eggonicer Cryovat and freezing them. By doing this it keeps all the eggs in the world frozen and in one place. Turning the 'incubator' function on will cause the eggs to grow to their full size while they are in the eggonicer.

The eggonicer then checks each of the Norn, Ettin & Grendel populations against user set minimum population values. When the chosen creature population declines below the minimum number set by the player, the eggonicer thaws and teleports an egg one at a time to the Eggceptor, ready to hatch to keep the populations up. The 'agitator' function will shuffle the eggs around inside the eggonicer, thus making the egg thawed and returned to the world a random one.

The eggonicer can also change the gender of the unborn creature inside the egg to keep at least one breedable pair in the world.

As a bonus this will allow you to keep in check over population of any of the three types of creature, especially those bored Ettins that pass the time by kiss-popping. 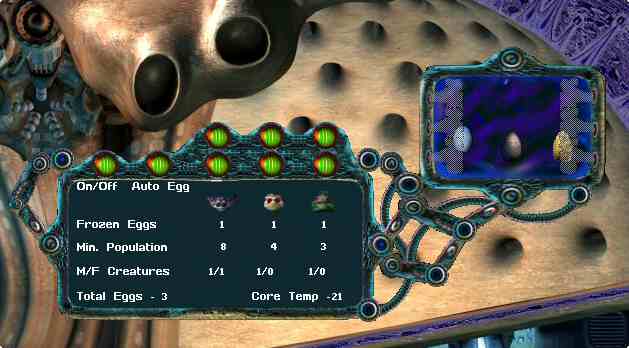 It can be switched on/off in C3 with the left-most button. The "Auto Egg" function creates a random first generation egg. The buttons just above the heads of the creatures in the C3 version will turn off egg handling for that species. The buttons above those will vend an egg of the species they are directly above and automatically switch off egg handling for that species (so that the egg isn't picked up again). The input port to the left of the on/off button allows you to connect the Numeric Input gadget to the eggonicer to affect the rate that the eggonicer picks up creatures - a higher value in the NI gadget will make the eggonicer work faster, a value lower than 20 will make it work slower. The input port on the right of the eggonicer is a self-destruct mechanism - to use this, turn the eggonicer off and input 212 through the port. Any frozen eggs will be thawed and dropped below where the eggonicer was.