Egg in the sky 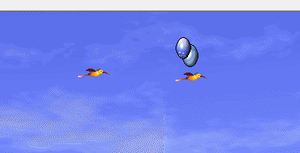 Eggs in the sky

If you are running heaps of COBs (and/or heaps of creatures) in your Albia, occasionally you will experience the bug known as the Egg in the sky. Basically, a small egg-shaped object appears in the sky far above the Statue of Nornity.

The most common cause of the sky egg is a pregnant norn failing to lay an egg after the termination of her pregnancy. The norn will revert to her post-laying state, but there is no egg to show for it, and the egg in the sky appears. The player can use a COB to force the female to lay an egg even after reverting back to pre-pregnancy state, and the baby will generally be born healthy. However, the egg will remain in the sky. The player cannot typically scroll to the egg itself without using the unlimited scroll feature of BORG.

This is not so annoying in itself, but all norns have an abiding fascination with it, and will attempt to walk towards it forever - sadly to the detriment of their health. ("Eggism", as coined in a question to Ask Laura)

I live in the C1 Albia, and recently the Hand has been very good to us in the way of COBs. Life has been lazy and slow - a change from running scared of the Grendel! One day, I was going about my business, and I noticed a strange egg in the sky... For some reason, I can't get it out of my head, and all I want to do is join with it. The Hand doesn't understand me any more - It wants me to do petty things like "push food". How can I explain to it that all I want is up there in that egg?

Why don't you start an alternative Norn cult, say, "Eggism"? You and your fellow "Eggists" could be shamelessly brainwashed into thinking that the "Great Egg One", (or in Nornish, "Gah Geg No") is even more higher and mightier than the Lone Shee himself! Your daily routine would include pledging allegiance to "Gah Geg No" morning, evening and before and after meals, momentous sacrifices of cheese and singing bleak, dreary songs of worship around the lighthouse. Your life would be one of servitude and oppression and your Hand would be powerless to intervene - for remember, "Gah Geg No's" authority overrules all! ;)

The definitive solution to this bug is to perform a mass exodus, and reset the world with less COBs and/or norns.