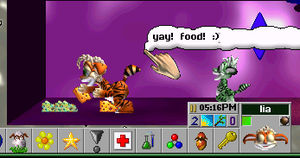 Two Norns hanging out in one of Edynn's metarooms

Edynn is a project attempting to design an essentially new Creatures game built on top of the Docking Station engine, created and programmed almost entirely by Chani (incubator and teleporter graphics were donated by Data). Though it has seen little development of late, it currently exists in a usable state.

Parts of Edynn may be adapted for future use in Lifandi.

Edynn is desparately seeking some decent spriters. If you are willing to draw some decent graphics (use the current ones as vague guides -- nothing more than that!), then please contact either Chani or Nornagon. Thanks! zareb is currently making a background for one of the metarooms. 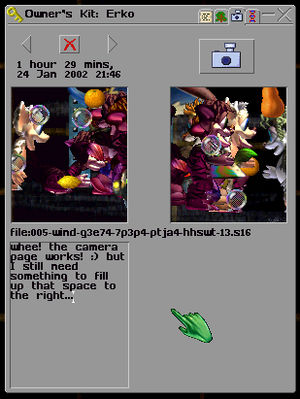 The current version of Edynn, Build 8, can be downloaded at Caisleáin Uaine (archive). There are both Windows and Linux versions available.

Edynn seems to have serious problems with Creatures Exodus. The darn thing seems to have changed all sorts of weird little things, Chani doesn't know what they are, and doesn't have the patience to try fixing them, especially since she doesn't have windows *or* exodus. She suggests using the free download instead, or using Linux where everything is much more happy.

If you do want to use it with the Exodus DS engine, however, you'll have to copy a lot of files... Chani isn't not sure where, she just knows that for some reason you now have to have lots of copied stuff. especially the Journal, that has to be copied to somewhere in your documents...

Also, Build 8 has that minor bug where you have to create a couple of empty folders after installing. bug list, progress, etc. are on Chani's wiki[1], although they've been collecting a lot of dust lately. Chani

When you try to copy an edynn world into ds, DS will think edynn is Creatures 3. I don't have Creatures 3 so I couldn't open it. Impish.