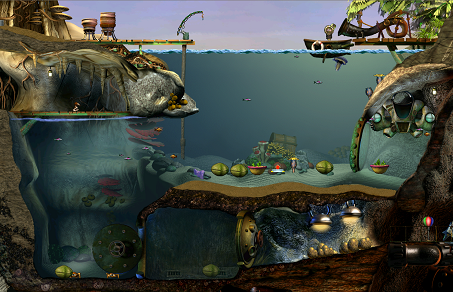 The Eastern Ocean or Light Ocean is a reference to Creatures 2 Albia. It's a large body of water to the east of the incubator room. A Fishing Rod stands on the pier next to it, and in its depths swim Zander Fish and Goldfish, as well as Green Clams and two species of Anemone (both of which are entirely harmless to creatures). The Starfish Pack COB by Amy injects into the Eastern Ocean.

The Eastern Ocean makes a much more ideal home for MerNorns than the Western Ocean, though it is recommended that the player adds another food source such as Red Algae for them to eat in addition to the native Zander Fish.

Due to its close proximity to the Incubator, many a curious norn has sadly met an early grave after falling into the ocean and drowning. While there is a Norn Launcher in the eastern ocean, to prevent drowning the player can inject a Pufferfish which will rescue any norns that have fallen into the ocean. Unfortunately, the pufferfish cannot differentiate between mernorns and regular norns, so if you decide to keep the two different breeds in the same world it is recommended that you use the Porcupine Pufferfish, available at Adventures in Nornsitting!, as it is able to tell whether a creature is actually drowning or not. Alternatively, you may use JayD's Ocean Bridges to provide a walkable land area over both oceans.