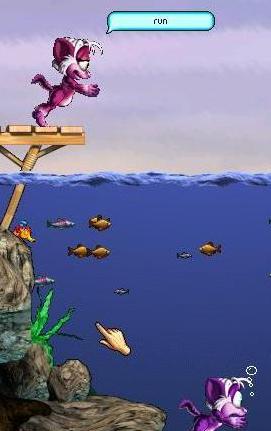 Drowning can occur in Creatures 2, Creatures 3, and Docking Station (if a metaroom with water, such as Terra Pluvialis, is used). It occurs when a non-amphibious or non-aquatic creature wanders into water and does not get out before the air chemical in its lungs run out. Some breeds, such as Bondi Norns, have some resistance to drowning, and True Warmblood creatures have the capacity to hold their breaths for a short time by storing oxygen in their blood.

When a creature is drowning, it cannot convert pyruvate into dissolved carbon dioxide, which releases energy. When a creature is drowning, lactate is produced, which causes muscle pain and is said to give the creature "a choking sensation"[1]. Crucially, when a creature is producing lactate from pyruvate, no energy is being produced. If a creature uses the norn launcher or is otherwise moved back into the air, the lactate can be converted back to pyruvate, and the creature will live. In Creatures 2, you can rescue drowning creatures by picking them up with the right mouse button, and releasing them safely back on land. However, you cannot drop a creature somewhere you have not already visited. The hand will show a red circle if you try.

If energy continues to drop, ATP production is threatened and in Creatures 2, the creature may become unconscious before death.