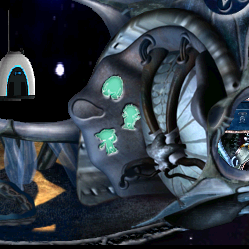 This door in Docking Station is currently open to grendels, ettins and norns, but can be locked against individual species using the door to exit the current metaroom by the hand clicking on the light, changing it from green to red.

Doors are a genus in the Creatures series. Creatures need to push doors in order to use them.

They were first implemented in Terra Nornia (where they came with all-creature locks).

There are a few in Creatures 2 that can be opened or closed to allow or prevent creatures from moving through certain areas, such as the volcano. In Creatures 2, visible doors are often classified as implements.

In Creatures 3 and DS, many connect the metarooms on the Ark and Capillata, although the Norn Terrarium has an internal door separating the Egg Layer from the rest of the metaroom. The ones on the Ark are connecting agents, while those on the Capillata can be locked against different species by the user or even be set to be one-way doors. In Creatures 3 and Docking Station, if a creature has a high need to enter or need to exit drive, they will want to use a door. Which drive will lower depends on whether that door fulfills stimulus 95 or 96.

Risen Angel has noted that in Creatures 3 and Docking Station, creatures tend to prefer doors to elevators in certain circumstances. One such circumstance is the link between Capillata and the Shee Ark, for which Vampess created an Umbilical Fix. Verm has created navi.cos, a development tool which predicts what creatures will prefer.