The Desert Island is an area in Albia that is featured in Creatures and Creatures 2. 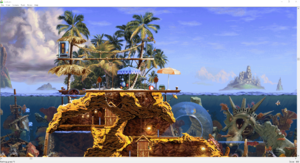 The Desert Island in Creatures 1.

In Creatures 1, the desert island is a remote island located to the far right of the Yggdrasil tree. It is fairly empty apart from a few toys and a carrot vendor located on the upper level that can only be accessed via a teleporter near the lighthouse. Coconuts were created by Creature Labs to provide a food source for hungry Norns (and Grendels).

Under the desert island are a few empty caves, one with a large glass dome so your Norns can stare at the fish until they die of starvation, and another at the bottom with a mover that carries Creatures back to the lighthouse. The island is quite popular with Grendels.

There have been several cobs created to enhance the island, including the Cave Carrots, the Parsnip Patch and the Coconut Crab.

The Desert Island is slightly bigger in Creatures 2, and is subsequently referred to by tips.txt and Creatures 2 - Official Strategies & Secrets as the "Island of Love".

To the left of the island is the Love Horn, a large instrument that when played will make Norns friendly and want to kiss-pop, making it a very useful aphrodisiac - if you can get your Norns to actually visit it, that is! Behind the Love Horn is a solid wall. The only ways Norns can reach the centre and right side of the island are to either use the submarine to enter the "Lover's cave" below the island and head up to the top of the volcano using the elevator or to keep them walking left from the desert until they eventually reach the island.

In the centre of the island is a large volcano and an elevator that descends into the highly radioactive crater. To the left of the island is a palm tree that grows coconut-like masham berries and a dinghy that takes creatures to the other side of the western ocean.